It is true — the method by which each of my children was delivered differs from the other. Yet, each delivery lives inside of me still, and the memories remain fresh in my mind as if they happened only minutes ago.

We are a family threaded together by the power of love. We are of different skin tones — those of cinnamon, vanilla, and cocoa … yet, we are one united family. On the most challenging of days as a mother, I remind myself to stop and to take in the miracle of it all. I’ve been given the gift of raising, guiding, and adoring these three beautiful souls.

I’d like to take a moment and share a little bit of my early story, now. I was adopted internationally as a child from foster care in the United Kingdom. As I matured into a woman, the thought of “having” a baby seemed foreign to me. When I was pregnant with my eldest son, though, it seemed as if I was meant for the experience. The pregnancy was a healthy one and on the day I gave birth to my boy Christian, I remember feeling overwhelmed with joy. As I snuggled him in my arms, an incredible realization came to me: I had never held anyone close to me whom I was connected to biologically.

In addition, the nine hours of labor proved to me that I could achieve anything. I was giving birth to another human being and I felt close to goddess status. At the same time, I also realized how difficult it must have been for my own birthmother to have let me go, so many years ago. “How did she do it?” I asked myself. The only answer that came to me was that, love: real and pure, gives you the strength to think beyond your own needs and extend yourself, sometimes, in the most painful of ways.

Christian’s birth taught me the power of forgiveness and a new appreciation for the woman who had given me life.

My second child, another beautiful little boy, was waiting for me in Russia. I recall the first time we met, it was a warm day in the southern part of his native land. My husband and I flew to him after spending the first night in Moscow. We were escorted to the orphanage, which stood behind a tall wall. I was nervous. So many children in need of families. One was waiting for us. What would I feel when I first saw him?

Inside the orphanage, minutes seemed to pass like hours, until — suddenly — the door to the waiting area flew open. I gasped and cried out, “Ian!” An orphanage worker walked into the room and handed my son to me. He was gorgeous! I held him up, so that I could drink him in. He looked into my eyes and began to laugh. That’s right, he cackled and giggled. I began to chuckle, as well. Then, my husband chimed in and before you knew it, the room was filled with our laughter!

Years have passed, and at twelve-years old, Ian is still that way: a little boy bubbling over with happiness. He’s pure joy and lives life to the fullest. Ian never asks, what if I can’t? It has simply never existed in his vocabulary. He’s a “can do” kind of guy. I don’t think Ian knows this, but I watch him daily. I take in his positive attitude and his excitement over life. It is infectious! And, I know that I am a more joyful person because he is my son.

Ian’s delivery taught me to laugh, even in the face of complete change and uncertainty. Just think, in Russia he was being taken from one world and plopped into another. Still, he went into the newness of his adoptive life with laughter. He hasn’t stopped to this day!

My third child, a little girl, was waiting for me in Ethiopia. I remember the first time I saw my daughter. It was a damp and chilly afternoon, in Addis Ababa. The roads, leading to the orphanage, were muddy from heavy rain. Puddles so large it seemed, at times, they might swallow the small car I was riding in. After some twenty-five minutes maneuvering through traffic, the orphanage was finally in sight! A large blue gate was the only thing standing between me and my girl. Once allowed through by security, my husband and I were taken into the family area, where we waited to meet our girl.

I rubbed my hands together and blew into my palms, warming them in preparation for this long-awaited greeting. I quickly took off my sweater and raincoat, as I wanted to feel my daughter against my skin! “Tiblet,” as they called her, (meaning: Let Her Be Greater), was brought to us by her caretaker. The woman placed our baby in my husband’s arms. He, then, placed her in mine. I said, through tears, “She’s perfect!”

Okay, some might argue that Tiblet was actually small for her suggested ten-months of age. She was malnourished and clearly ill with heavy cough and congestion, watery eyes, and diarrhea symptomatic of giardia — a waterborne intestinal illness caused by exposure to unsanitary water. Tiblet did not smell of baby powder and sweet-scented lotion. She was not clean from a fresh bath and dressed in the finest of clothes. She had been layered into several pieces of mismatched garments (most of them size three-months), keeping her warm in the bone-chilling air.

This tiny stranger stared at my face for several minutes. Then, as if she realized her parents had finally arrived, my daughter rested her head on my shoulder and quietly nodded off to sleep. I recall, even through my own exhaustion, feeling a sense of complete and total happiness.

It’s been six years now since we brought our little Ethiopian princess home. At seven-years old, she is a loving and feminine force in our home. I had gone to Ethiopia to help an orphaned baby girl. In the process, she has opened up my eyes to the greatness I possess within — the greatness we all possess within — because we have been uniquely designed by a magnificent Creator. The meaning of my daughter’s name was divinely inspired, I believe.

Tiblet’s delivery breathed the message, Let Her Be Greater, into my soul. It has changed the very course of my life.

My children are from different parts of the world. They are of different race, color, and culture. Some might call us an interracial family. Yet, in our minds, we’re simply a family. We love one another, look after one another, teach one another, and bring out the best in each other.

As a mother, when I do turn on the television, it seems that the world is very different outside of our home. Governments gunning down their own, countries using threatening tones, people damning each other because of differences, perceived or real. Political elections where dirty laundry is welcomed and not put in a hamper where it belongs. People creating lines of division, over fear, over an unwillingness to listen, to understand, to bring down the walls and let love in.

Oh, if the world could only experience the beautiful blueprint of adoption! The working manuscript of family that is created, not solely through biology or nationality, but completely out of love. If society could only adopt this type of attitude, well, the world really would be a better place.

Yes, I have delivered three children. They are the most incredible people I know. They are the greatest contribution I could ever make to this world. I watch them as they play and interact, and I believe in peace, because I see it — living and breathing — right before my eyes.

Michelle Madrid-Branch is a life coach, author, speaker, and global advocate for women and children. She is the author of Adoption Means Love: Triumph of the Heart and the children’s book, The Tummy Mummy. Connect with Michelle on Twitter @LetHerBeGreater, Instagram, or on Facebook.

One thought on “Threaded Together By Love: A Guest Post By Michelle Madrid-Branch” 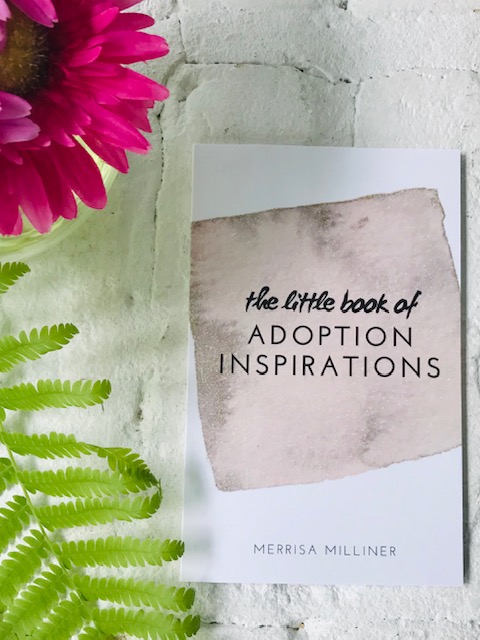